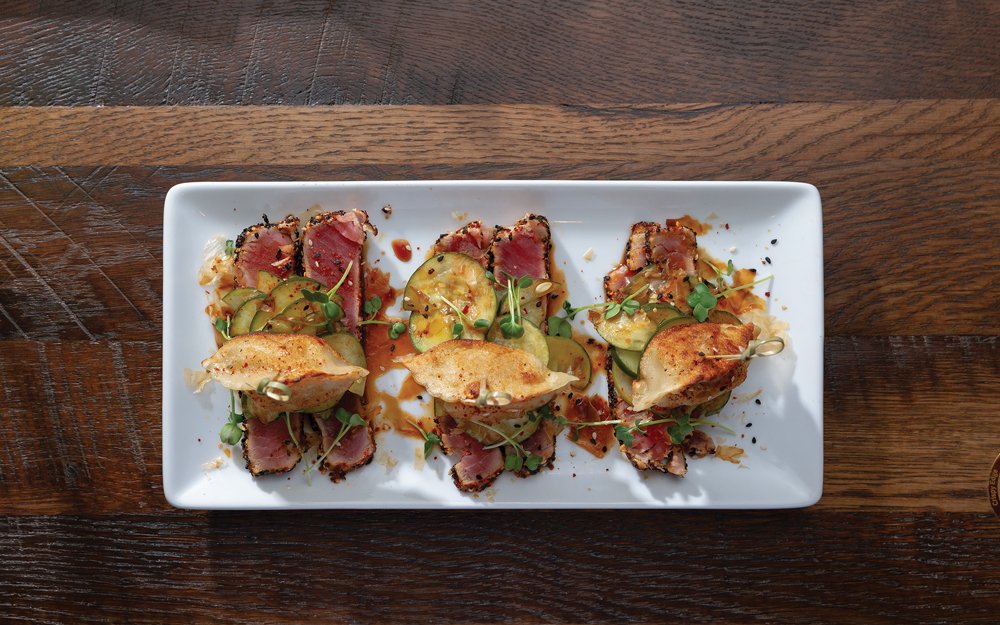 David Dresner’s potsticker-focused restaurant is a first in St. Louis.

It would be easy to call out Crispy Edge for serving entrées that are so darned cute, they push our buttons. Like the Hello Kitty logo or Anne Geddes prints of babies wearing rutabaga costumes, the meals at the Tower Grove South eatery are maybe a little too adorable.

But no one really cares. The fastidiously prepared potstickers may be served on tiny plates with complementary dipping sauces, but the precious daintiness of it all means naught; this joint elevates the humble Chinese appetizer to new heights.

The chefs stuff 11 different fillings into almost as many potsticker doughs. They then pan-fry the li’l dough pockets to a satisfyingly chewy char and plate them with 11 different sauce combos. It sounds like the freakishly precise and miniature work of Oompa-Loompas.

Whoever’s doing it, the work pays off. The Mediterranean lamb potsticker features a parsley-and-fennel dough that yields to a succulent nugget of lamb. It’s served with a cool tzatziki sauce. The traditional potsticker, with its ginger-pork-cabbage filling and citrus ponzu glaze, easily outdoes the often gummy potstickers at many Chinese buffets. Owner David Dresner and executive chef Tori Foster really show their stuff with a chorizo-and-date filling tucked into a turmeric-dough potsticker, served with lemon pepper cream sauce. The sauce functions like a creamy dessert, offsetting the spice. (Think of a bite of spicy Indian food cooled by a sip of mango lassi.)

There are dinner entrées, too. One, named From the Sea, consists of ahi tuna strips beneath a not-too-piquant wasabi cucumber salad, garnished with—what else?—potstickers.

Ordering can be tricky. How many potstickers does it take to fill you up? You can order three of one variety and three of another, thinking that a half-dozen potstickers sounds like enough for a meal. They’re so delicious that in 10 minutes, your plate is empty and you’re still hungry. Be sure to add sides: couscous, street corn, or beans and rice, for instance.

Dessert is as adorable as a baby porcupine. Single potstickers resemble Hostess fruit pies shrunk to the size of Matchbox cars. The decadent winner is the Apple Pie potsticker: apple pie filling inside cinnamon dough, bathed in bourbon-caramel sauce.

Nothing makes a diner feel old like a restaurant where dark walls and dim lighting necessitate the use of the flashlight feature on the iPhone to read the menu. Crispy Edge is indeed one of those. The brightest corner is the hydroponic garden, where grow lights make for a lurid fuchsia glow. It’s hard to imagine that this was once the Grand Oak Hill Community Center, home to summer art camps for kids and drop-in activities for seniors.

This dumpling destination is a great place to take out-of-towners. They won’t find a spot like this anywhere else, from Manhattan to Manchuria.

The Bottom Line: Pan-fried potstickers with house-made doughs, fillings, and dipping sauces make for a superb night out.